Information from the former TurnerDownhill site, last updated in 2002, so some information may no longer be accurate. 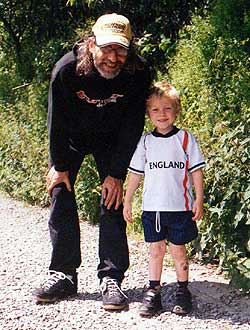 When did you start skateboarding?
It all began for me in the heady Punk days of 1976. The start of skateboarding in the UK. I was able to rollerskate and transferred to boards when they became available. I am sure that a lot of it was peer pressure to skate, as friends already had boards. Unfortunately for me my parents were very against skateboarding, I guess it was the stories (facts) of broken limbs etc, and refused to buy me a board, or anything associated with, which put me at a bit of a disadvantage at 13. I must say that they have not changed their minds, even today they think I am mad and now too old. However this probably encouraged me to do it even more.

My Grandmother was my saviour and took me to South Bank, possibly the birthplace of skateboarding in England, where a bloke sold boards from his car. She bought me a Skuda California with SK8 wheels, similar in shape to OJ slalom but much softer. I learnt everything on this board, as I could not get another, and started doing 6’ straight slalom on it, later reducing to 5’, even though it was a solid oak deck and the wheels were worn to the bearings at the back. It was not until the ‘80’s that I had my first slalom board.

What attracted you to slalom skateboarding specifically?
At South Bank there used to be slalom skaters. Many progressed to the highest level but the two that I remember the most are Tim Panting and Jim Slater. They used to set-up 6’ straight at South Bank and enter the course at a terrific speed and navigate through the cones. This really impressed me at the time, and I saw it as a way to skate that did not need any specialist terrain like ramps etc. I started practising by myself and became quite good at it.

I like the ratio of speed:skill:nerve that slalom requires. I was asked in a recent interview what I like most about slalom and I replied the speed. The speed in mph and in cones-per-second. In the early ‘80’s I discovered I was not alone in this sport and met all the South Bankers and Crystal Palace skaters and then started pushing really hard. With these guys we developed our own style of slalom, reducing the cone distance and increasing the speed. This formed the basis of what we now term as English Slalom.

Why do you ride for Turner?
For me Turner have always been the ultimate slalom deck. It has the sleek looks and elegant design above and beyond that of other manufacturers, and a construction technology before its time. It has always been considered the Ferrari of slalom boards, because of the above and also the cost. I have never bought a Turner, as I never had the money, but inherited a stiff yellow cutaway in the ‘80’s. This was given to me, as a token of my skating, by Martin Sweeny, who in turn inherited it for the same reason from Tim Panting. This makes it a unique board which I only used to ride on special occasions in fear of damaging it. I still have this deck and treasure it, and one day I might just give it away.

I ride for Turner because they and I are part of this rebirth of slalom. I remember last summer, my partner said I should skate again and I found NCDSA on the net. I put up a post about are you US guys still doing long slow slalom and Bob immediately asked me to skate for him. It did not occur to me that this was THE Bob Turner, so I corresponded with him for a while, exchanging views quite freely, having interesting conversations about skating, until the obvious dawned on me about who he was, with help from Floyd. Our opinions seemed matched with our enthusiasm for the sport so I was pleased to join the team when asked in the new year. Skating for Turner is not about money or winning competitions (although I’ll have some of that) it’s the honour of riding for the Ferrari of the sport. Both the team and the company have the aim of evangelising slalom. They also make the stickyist wheels.

What's the future of slalom skateboarding?
This is another critical time for slalom. The internet has brought about this massive global growth in slalom. It is our role now to keep this going and enlarge awareness and participation in the sport, an aspect Turner actively encourage. However it is not that big yet. There is very little money around, especially in Europe, and it is too early this year to try to globally co-ordinate the growth.

The main areas of concern for me is that a world competition needs to be staged where all can skate at a single, or series of events, using a variety of types of courses, without skaters having to break the bank, destroy their personal life, or live in the USA. Money is the only answer to this.

The second issue is that we are all old. We need to encourage younger skaters to enter the sport. This should be a prime aim for everyone. If no one buys slalom boards then none will be made. This is what happened before. The Grass Roots organisation is key to this.

Slalom organisations, globally, need to work together, publicly, to present a unified position for the sport for it to enter more structured events like the X-Games and the Olympics. Europe and the US are the two key areas for slalom, although this is not to say it is not practised in other places. In the past we went our own ways due to cost factors and qualifying regulations, this must not happen again. I hope the Turner European skaters will help to blend these two cultures. Other teams should take this stance with transatlantic teams. There is plenty of talent here.

The future for slalom looks good at present, but do not sit back and watch it grow. It will only happen if you make it, no one else is going to do it. Money will come with greater awareness and exposure, but that is the hard bit. The next two years are critical to bring the global slalom community together and to agree a platform to compete. Do not approach organisers with problems, give them solutions.

What type of slalom skating do you consider your specialty (tight, hybrid, GS)?
People consider me to be a tight specialist, however I also like GS and hybrid. But what is tight. From skating with Simon Levene he says that my wide courses would not be acceptable in the US as they are too tight. Some of our GS courses may seem more appropriate to the US style tight. For me 4' straight is tight but I like 5'. 6' is wide unless on a serious hill or with a ton of speed. 6' centres with 2' offset is good fun on a slope.

I like all slalom. The type of course I like is one where you have to think your way through it. You have to accelerate, brake, slide, hanging on by the tips of your toes, and skate the perfect line. In my opinion a good course will have urethane tracks around the cones after about 30 minutes skating and will be demanding for all skaters, every run. The course should try to create and break the rhythm of the skater at several points of the course. I love cones where you stretch to get around them, where you are on tip toe on the board, sliding slightly and weightless - throwing your body weight to the next cone. However I hate front wheel slides, four wheel drifts and rear wheel slides are fine. I also like push starts. I consider the skill of the skater is also getting their feet in the right place. Its also exciting when you have to change foot position at 30mph on a GS course. Ramps do not always cut it.

Give me a course and I’ll skate it but it may take me a while to get used to US style courses, but if I get it wired, watch-out.

In what year did you enter your first slalom race and how did you do?
It took me a long time to realise that I was good enough to enter competitions. The first one I did was at Kettering in England, north of London in 1980. This was a skatepark event so it was a short course with a terrifying run out. The starting ramp was even more terrifying, even though we started from half way up. I progressed through this competition until the semi finals. I forget who I raced now but I lost and came 4th. My advantage there was my ramp riding experience and tight slalom skills, as the speed of the ramp made many DQ in their run. I have always been fairly accurate when riding, mainly because I learnt to slalom with bricks as cones. 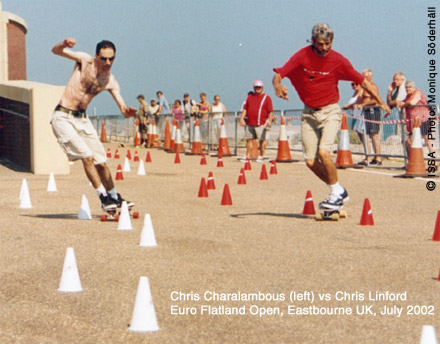 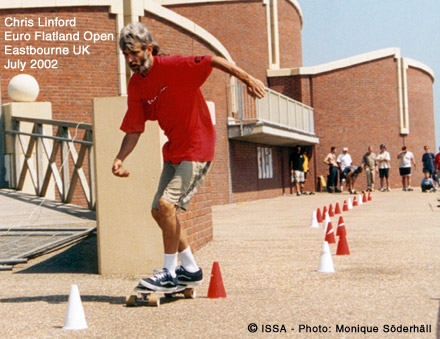 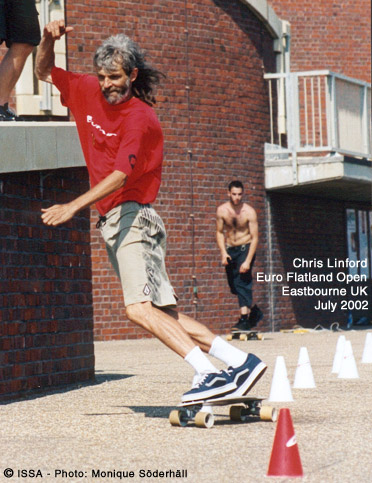 Check out http://www.Ukssa.net for more info on what Chris Linford is up to!
Top
Post Reply
2 posts • Page 1 of 1