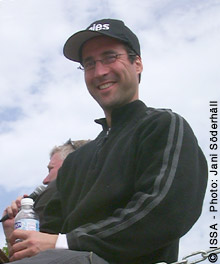 Dan has probably done more for the slalom revival than you might think. Ever since he released the first version of the Seismic truck he has been working on opening new horizons for skateboarding by talking to skaters, manufacturers and magazines. He is constantly in touch with a great number of skaters all over the world to encourage cooperation and share his ideas on the development of this sport.

Dan has also been instrumental in running many of the races during the last few years by handling the times and cone counts and calculating the final results. For this purpose he has developed an advanced spreadsheet which automatically handles qualification and head to head bracketing.

By giving the trucks a non conventional design and use springs rather than grommets he has even inspired other manufacturers to take a step away from the old 1970's truck design.

This year Dan will celebrate his 40:th birthday and what could be a more appropriate timing and location than days after the European Championships in Antibes, France and just days before the 2003 World Championships, Morro Bay, USA.

Dan recently wrote his own story for Concrete Wave magazine.

The end of page is somehow damaged, but here is the text of the missing two sections:

Despite all my efforts, German manufacturing costs made the Seismic truck hopelessly expensive. There have simply never been enough channels interested in trucks that retail for $75-$100 each.

"Gliding and turning are the heart and soul of skateboarding," I said in Public Domain in 1988. I'm pleased to hear those words repeated now and then. Longboarding, slalom, downhill, bowl and other gliding-oriented disciplines once again stand to enjoy a healty future. To all devotees of the magic rolling board I say "Skate to express yourself!".


(I couldn't figure out how to fix the image, which looks fine on my PC, but is broken once uploaded, but I have requested some assistance).
Top

OK, the second page scan is now fixed. Still don't know why it happened, but Lillis fixed it. Now when I resave the image I can't break it any longer so the image was probably corrupt in some way, but which didn't show up when the image was on my PC, only when it was on the web.
Top
Post Reply
3 posts • Page 1 of 1