Glenn S just told me about this website, well worth noting:

These guys are skating with skipoles! 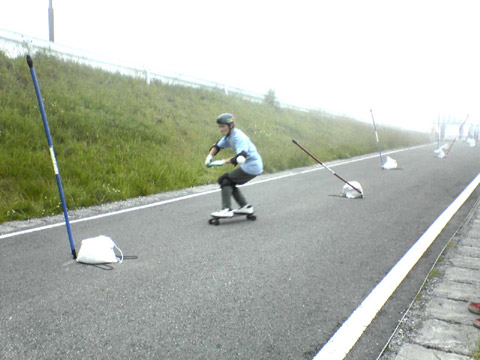 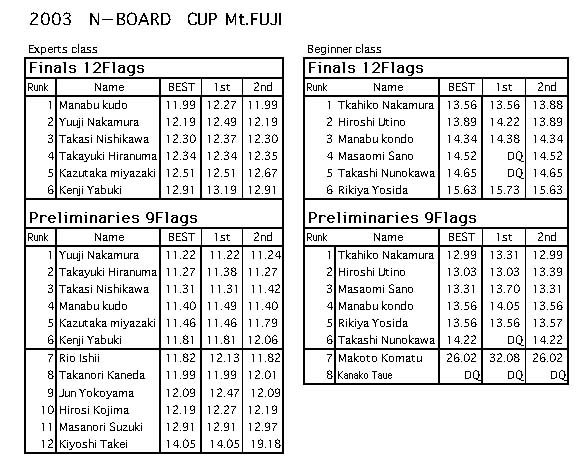 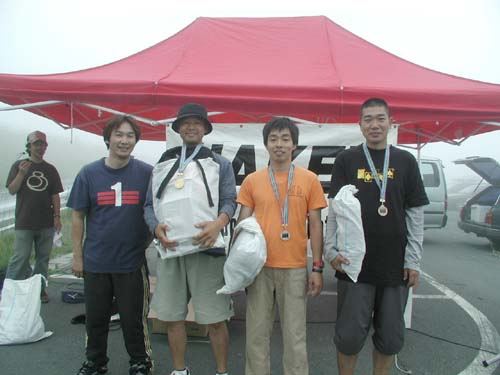 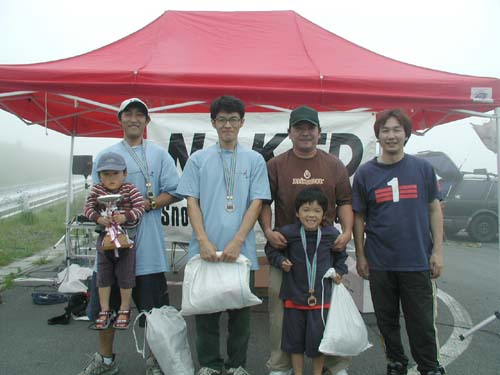 Looks like the winners took home prizes of young children. I think T shirts are a better alternative.
Dont go getting any ideas about ski poles Jani.
Top

The link on that site for the mp4 video clip is weird.

Try this one if that one does not work for you:

Hello
My name is Toshi who organized Mt. Fuji in Japan. I am also spokesman of Slalom division of AJSA (All Japan Skateboard Association). We use ski poles for Unicomm Cup held every year. Dual tight slalom event will be by cones on Octorber 19, 2003 at Yokahama. I would like to exchage any ideas about slalom sk8 in this forum.
I thank you for Glenn S who bring my site to Jani's write.
Top

Welcome Toshi,
how is the slalom scene in Japan? Growing? (I'm french)
You never try to slalom with cones? it's less dangerous and easier.. but why not skipoles

I saw that you put a turn just before the end line, right?
Everybody won't love it but it's can be fun!
Top

Hello, Vincent
Slalom is rather small compared with street skate in Japan. I guess everywhere, but Europe like Fance is strong for slalom skate.
There are four slalom circuits in Japan.
We use ski poles once a year to who love skate for snowboard off training. It is not so dangerous you thought.
Top

Do you have 4 spots where you can *officially* train slalom in Japan (made for that and perhaps for something else to, but skateboarding is accepted there) ?

I don't know any place like that in France, even if we've got a few spots (pavements and streets) where we don't have problems to skate.
Top

When i was into distance inline skating and such a few years back I skated a 'slalom" course with poles/break aways (set for a ski team) on my rollerblades....scary to say the least and it was fairly low speed.

used to race snowboards and have many memories of hitting those poles wrong and it hurting very badly.

You guys in japan are brave!!!!

I'd love to see more activity from japan in slalom....it could be great.
Top

Vincent,
Read Toshi’s first message again. He says that they do dual tight slalom with cones in an event on October 19, 2003, at Yokahama. Want proof that they do cones in Japan? - Enjoy these videos: <a target=_blank href="http://www.rinc.or.jp/~takayuki/LSB/tac ... ">Kudoh</a> and <a target=_blank href="http://www.rinc.or.jp/~takayuki/LSB/tac ... /seigo.mov"> Seigo</a>.

Welcome, Toshi!
I too am afraid to slalom with poles. It is good to know that Japan also does it with cones. In the US, we use cones for all slalom, even GS (giant slalom). I look forward to seeing Japan’s other events posted on this site.
Top

I notice that under "Edit Your Preferences" above that there are many languages a user can select to help navigate the site. Are you able to add Japanese to that list?

Glenn, Reply: I'll look into that as we upgrade the forum, which should hopefully happen during the autumn. However the Japanese option will only allow them to view the standard menu texts in Japanese, not to read the messages...

Toshi Yamada wrote:Hello
My name is Toshi who organized Mt. Fuji in Japan. I am also spokesman of Slalom division of AJSA (All Japan Skateboard Association). We use ski poles for Unicomm Cup held every year. Dual tight slalom event will be by cones on Octorber 19, 2003 at Yokahama. I would like to exchange any ideas about slalom sk8 in this forum.
I thank you for Glenn S who bring my site to Jani's write.

I will do my best to attend your competition in October.

1. What is the temperature that time of year and likelyhood of rain?

2. Is it possible to post a photo of the surface with a bearing in the photo for reference? This might encourage others to attend.


3. Do your events get any television coverage, and if not it is okay, but hopefully having several international competitors come over to Japan might help make your event look even more interesting to the Japanese News Media.

4. I understand Japan's cravings for American board products. In the Early 1990's much of the USA's snowboard industry was supported and financed by prepaid pre season orders by Japanese Businessmen. I even recieved one such very large order for my snowboard company. This was the norm. Without this infusion of cash the American Snowboard market would have never gotten so large so quickly.

5. At one time 1/2 of all the women snowboarding worldwide were Japanese. And Japan consumed more than 1/3 of the world's snowboards (some estimates are even higher).

I realize that Pavement is harder than snow...but I also understand the Japanese mind set of buying performance and quality. I could see larger intrest in Japan for Roe Carbonfiber Slalom decks and PVD trucks and Radikal trucks than in the rest of the world combined many times over... I understand you are in a deep recession- hopefully this will coe to an end.

Well, there it is! The perfect criddling killer.
Top

Michael Stride wrote:Looks like the winners took home prizes of young children. I think T shirts are a better alternative.
Don't go getting any ideas about ski poles Jani.

Michael,
I think that they are skating around the "goodie bags" at the bases of the ski poles, and it looks like that is what they are taking home! Hey what better incentive than that for the winner!
Top

Toshi Yamada wrote: Hello,
My name is Toshi who organized Mt. Fuji in Japan. I am also spokesman of Slalom division of AJSA(All Japan Skateboard Association). We use ski poles for Unicomm Cup held every year. Dual tight slalom event will be by cones on Octorber 19, 2003 at Yokahama. I would like to exchage any ideas about slalom sk8 in this forum.
I thank you for Glenn S who bring my site to Jani's write.

The date of this event is now changed to November 2nd, 2003
Top

I'm about to book tickets- any other updates?
Top

I'm also planning on going to the race in Yokohama, Japan on Nov. 2nd. Good excuse for visiting family and doing a little racing. Booked the tickets. Last time I checked the tickets are around $400 roundtrip from LA or San Francisco.
Top

I received these answers to an email I sent to the race organizer in Japan.

1) What kind of a course will it be? (tight slalom or giant slalom)
tight dual slalom

2) Is the race going to be on hill? If so, how steep is the hill?
flat course

3) Also, how tight will the cones be center to center on average.
160cm interval

4) Will the cones be offset or in a straight line?
Straight

5) Also, how is the road condition? Is it smooth or rough?
farly smooth

6) How long is the course? and is there a run out?
50m long and some run out after goal
Top

anyone know of a new site? Unicom is down

Looking to race over there for a bit.