Lots of congrats to Christopher!

We have to organize a re-run with Christopher and Dany. I'm sure it will be close...and fun!
Skate Hard While You Can

We have to organize a re-run with Christopher and Dany. I'm sure it will be close...and fun!

Yes, let us know if you have something going on in Madrid or Barcelona in the late summer. We only have until 31 December to go for a re-run together in junior category.
Top

Here's what I saw on the official Guiness site today. They're a few years behind on this one: 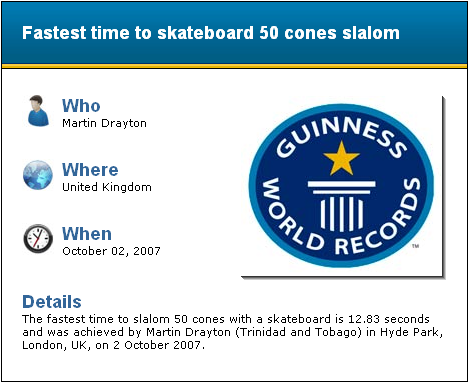 Marcus and I have been discussing contacting Guinness to have this record updated.

I was aiming to have the diplomas ready for christmas but missed it with a few months. Anyways congratulations again, and soon you will get them! 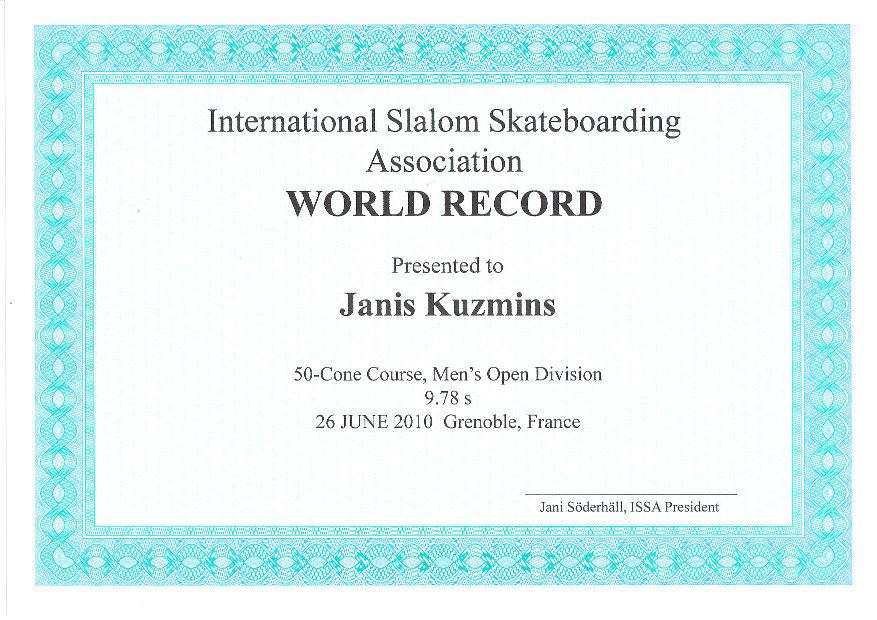 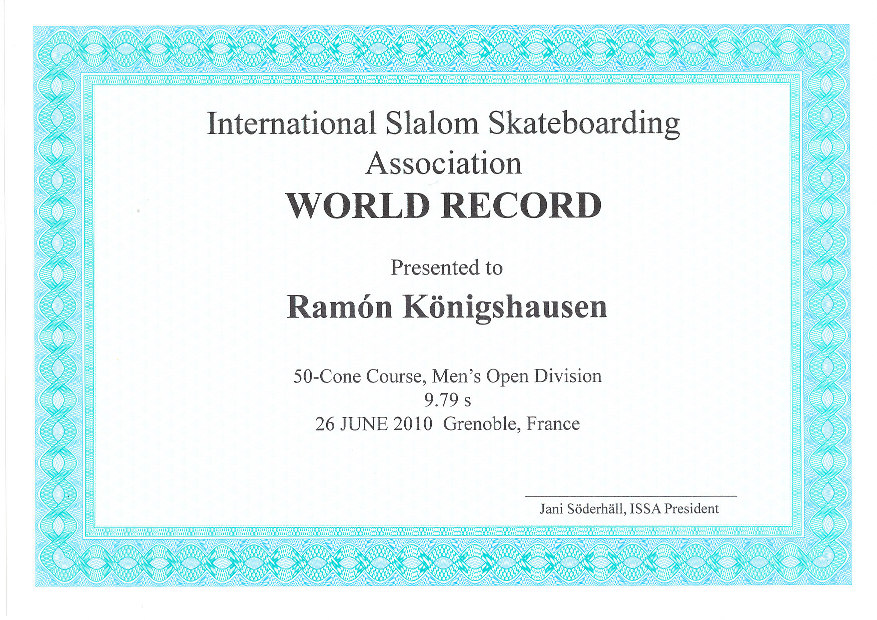 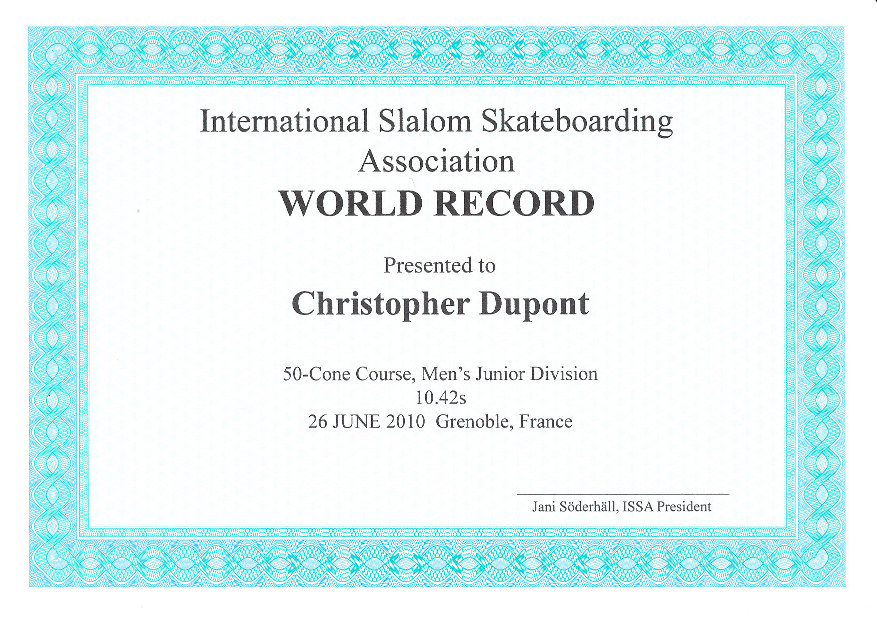 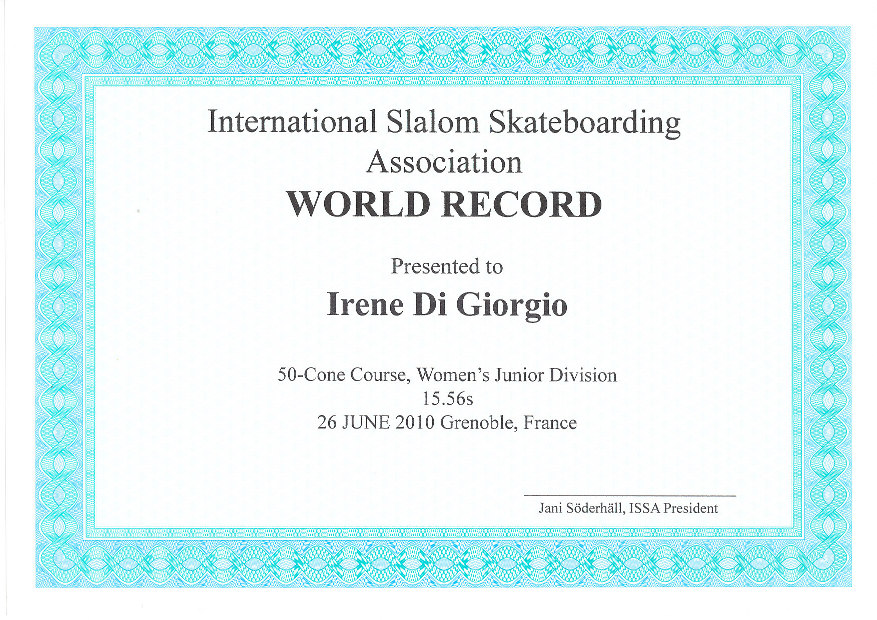 Finally Guinness has updated their site with their latest recognized 50 cone World Record:

Congratulations to Mika and Viking.

Now, did you respect all the ISSA rules? Check out rulebook under the Resources menu.
Looking forward to hear all about it!

I was in charge of timer and that was in line with the center of the first cone and last cone.
Yoda
Top

I think that Jani referred to this:

DOCUMENTATION REQUIRED
• A description of how the course was measured to be in compliance with the rules,
including cone spacing, course flatness, wind speed, and timing equipment
• Photographs of the course, including: Start line, Finish line, cone placement (to see if it is
straight).

Timing equipment was trackmate with concact stripes. The rest you have to ask Mikael and Viking about.
Top

Jani we have photos and film from yesterday should we post it here or email you this in order to get it oficial?
Top

Please submit to the ISSA Secretary (Ricardo Damborenea), but you can post here too if you like.

Extract from the World Record rules:


6.2. DOCUMENTATION REQUIRED
• A description of how the course was measured to be in compliance with the rules,
including cone spacing, course flatness, wind speed, and timing equipment
• Photographs of the course, including: Start line, Finish line, cone placement (to see if it is
straight).

6.4. WORLD RECORD ADMINISTRATION
In order for the ISSA to accept a world record, the following must apply:
• Course documentation received
• Attempts were made at ISSA-sanctioned events.
• New world record time must be less than the old world record by 0.05 seconds or greater.

(the last rule, that is must be more than 0.05 better than the previous record is no longer valid. The ISSA BOD has voted to remove this rule, but the document has not yet been updated to reflect that change.

On 18th August, 2012 in Riga, Uzvaras parks there were 3 new World records set in 50 cones (if, of course, Vikings record is still unofficial)!


Submit the following information to the ISSA Secretary (PM sent ;) ):
• Name of contest director: Gustavs Gailitis, president of Latvian skateboarding federation
• Location of contest: Latvia, Riga
• Date of contest: 18th August, 2012
All the riders had 2 attempts in the the first one Anna managed to beat not only Womenjunior but also Women record - just one minute later Lienite beat her record by 0.41! Janis set his record on first run. In second run nobody improved their new records!
• Name of racer, time, (cone penalties):
Anna Gailite 12:40 no cone penalties
Lienite Skaraine 11.99 no cone penalties
Janis Kuzmins 9.77 no cone penalties
• Course documentation:
The course was marked & measured already in 2008, during the ISSA World record attempt weekend – we re-measured to make sure it is 160cm center to center, 50 cones. The course is flat (some international guys like John Gilmour and Dominik Kowalski can approve it, because they have been there), in 2009 men 50cone record was made there (9:82) by me, Gustavs Gailitis. The course still is with great pavement, that is why it is fast and grippy. There was no wind during the record attempts. We used Professional timing equipment from our national skiing team (the same we used in 2nd day in Euros 2012).
• Attempts were made at ISSA-sanctioned events: It was sanctioned BASIC
If you want to upgrade your board,visit - http://www.coneracing.com/

hey...i have a question
i just went through this all and we had a session with timers,flat course,50 cones.
during that race kathrin sehl had a time of 11,753 secs on the course.
how do we get this official then?
there were enough people at the race to witness.

should we repeat this with video evidence?

kathrin can easily beat the 50 cone record with the times she had.
please let us know and we will repeat this if desired
Top

WORLD RECORDS – AT SANCTIONED EVENTS
World record attempts may be made at any contest with PRIME or greater sanctioning, or
at contests of BASIC sanctioning if the sanction application specifically states that world
records will be attempted.

It's easy, just read the rules available in the Resources section (main menu above), then get your race together and just do it!
Submit all details to remove any doubt and also so that we can all be proud of the new world record. Go for it. The 50 cone record needs some challening I guess as it hasn't been around for so long.

i just went into it
kathrin was way faster here in the last fun-race we had than the previous world record-i would say we can go 1/2 sec faster with the times we had at the last session.
also i will check into juniors.
vincent runs the same course and this would be most interesting to see what a 12 year old can do
you can expect something soon i guess
we just need to set things up in a few weeks from now and make it.
Top

Go for it! We should push these records up to the limit of what is possible!

BTW how often/how long usually it takes time that these WorldRecord applications will be verified?
Naturally faster cycle would be better due it would attract more to make people try new records.
Currently i know, based on messages here that new 50 cone (2+3 records) and one 25 cone application existing but have not heard anything about decisions, for any of these.
-pokkis

I just returned from vacation and will initiate the review of all recent record attempts soon.

General note: Please make sure you have posted all necessary information for the BOD to review.

Thanks Jani, i know that in some parts of world this is stil holiday season :) even we start to prepare here for winter season already
-pokkis

From the front page news:


Two other world record attempts were reported but have not yet approved. August 5; Viking Hadestrand, men (9.436) and Mikael Hadestrand, Masters Men (9.826). These two records have not been approved yet as sufficient evidence has not been provided.

Because we approved Janis Kuzmins' record earlier than Vikings, Janis still receives a diploma for his world record. Janis' record was the best approved time September 12 - October 7. We just need to keep it in mind for the history books, that this information can be somewhat confusing. Had the full documentation been available for Viking's record prior to our September 12 approval, we would not have acknowledged Janis record.

Thanks Marcus for the world record handling and the beautiful diplomas. Mika your's in the mail.

ps. Still some other edits to be done. Like adding Janis Peking record from 2013.

These results are outstanding from our 2018 50 Cone Challenge. We had 3 new records.
Video On YouTube.
8mph wind when we got there, dropped to pretty much glassy as evening came. I used my handheld anemometer.
Video will show 1.6m 5’3” spacing

World Records reported by Lynn in 2018 have finally been added to the spreadsheets.
Sorry for the delay.