by Wesley Tucker
All the ISSA members have this list as I sent it out last fall as an excel spreadsheet with all the members's names and e-mail. I'll repost here the names: 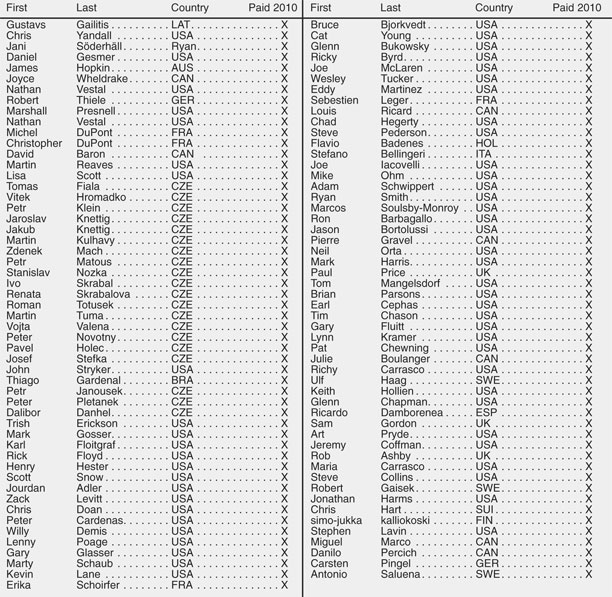 Your list does not include the site sponsors for 2009, so we need to add those.

That done Robert Gaisek will be in twice. Stephen Lavin too and maybe a few more. Needs to be looked into.

by Peter Pletanek
I just paid with paypal. Thank you.

Ed note: Confirmed - money received! /Jani
by Donald Campbell
Mike Ernst,a rollerblader these days for along time already
Dieter Fleischer, who is dieter fleischer?germany?when?
Eric Groff,arab,gone for sure,sad but true
Mary-Beth Lavoie,a girl,lady,from when?
Daniel Ridoli,aha? who is this?
Valdis Sermols,and who is this guy?
Martin Sweeney,doesn't race or post anymore
Jesper Thunstedt,who is jesper thunstedt?

just looking at the list above i found a few that a quasi non-existant anymore
needs to be updated for sure,i bet there are more dead bodies in there

couldn't we get this done sooner or later to make it a bit more credible?
by Jani Soderhall

Donald Campbell wrote:just looking at the list i found a few that a quasi non-existant anymore
needs to be updated for sure,i bet there are more dead bodies in there

couldn't we get this done sooner or later to make it a bit more credible?

The new ISSA started it's life by giving an automatic membership to all ISSA representatives from the 90's. It was the best I could figure out to honor the effort they did back then getting this association started. Many of them may, as you know, not be active right now, but as long as the membership is for life (could be changed by the board) they'll stay members until they personally withdraw (has only happened once).

Here's a who's who (of those that you reacted upon):

Former ISSA representatives:
Mike Ernst,a rollerblader these days for along time already - true, but many others have come back from their other lives to rejoin slalom, why not Mike?
Dieter Fleischer - longboarder, lives in France nowadays
Kaupo Kukli,norway?huh? - No from Estonia, lives in Finland. Doesn't skate I think.
Daniel Ridoli,aha? who is this? - Former Ranking #1, once ahead of Luca in the ranking!
Valdis Sermols,and who is this guy? - Latvian ISSA representative. Still helps out at races.
Martin Sweeney,doesn't race or post anymore - True, doesn't skate, but is world famous.

Monthly sponsors/paying members
Eric Groff,arab,gone for sure,sad but true - True, but still a member
Mary-Beth Lavoie,a girl,lady,from when? - Helped out a many races, probably at yours too! and paid her membership!
Jesper Thunstedt,who is jesper thunstedt? - Don't know, but he paid, so he's in.

The maintenance of this list is shared between me and Wesley. Can you tell me what needs updating?

/Jani
by Wesley Tucker
Mary-Beth is Claude Regnier's "significant other." She's probably been to more races in the past eights years than most of the racers in the ISSA.

The ISSA offers LIFETIME membership for a one-time fee. I am not going to take it upon myself to decide who's dead or alive.

Fortunately, the ISSA does not have any rules regarding the necessity of a quorum of paid members in order to accomplish anything. So it's not like those absent somehow affect the ongoing decisions and operations of the organization.

If this is something the new Board wants to address and discuss with the members then at that time it can be adjusted.
by Robert Gaisek

I have just sent my joining fee, I thought I had done this a couple of years ago, my mistake!

By the way Martin Sweeney still comes along to races in the UK. He is a legend!


Ed note: Confirmed - money received! /Jani
by Jani Soderhall
Here are all the site sponsors for 2010, but I guess they've already been added to the listing above.

/Jani
by Wesley Tucker
I'm on this thing, dude, like white on rice.
by Robert Gaisek
Who is Antonia? Antonio after dark?
by Jani Soderhall

/Jani
by Wesley Tucker
Mr. Steve Lavin of Chicago, Illinois is the FIRST to pay his annual dues for 2010. Spain's Ricardo Damborenea was a close second by just a few hours.

I'm not going to announce each and every payment received but did want to give Steve and Ricardo their props for getting on the stick and doing the deed.

Please remember: there are two different payment amounts and it costs MORE on race day. Paying early not only grows the ISSA but also makes things so much simpler when what's important is getting on the hill and down the course.

Thanks again Steve and Ricardo!

For those who have not read the release from the ISSA, the dues schedule is as follow:

So in 2010, we will begin charging an annual fee for ISSA membership. Racers in Main and Major ISSA-sanctioned events in 2010 will be required to join the ISSA and pay this fee. The fee will be $25 USD (€20) if you pre-pay before going to your first race. If you choose to pay at your first race, the fee will be slightly higher: $30 USD (€25). The PayPal address for membership dues is

The complete release detailing the ISSA's new initiatives, racer and organizer benefits and where the dues is going is at:

I am now German nationality, not Czech

I am now German nationality, not Czech
Regards
Peter
by Jani Soderhall
Wesley,

Just for the archive, can you do a similar listing for all that were members up until 2010? Ie without the new members?

Just for the archive, can you do a similar listing for all that were members up until 2010? Ie without the new members?

Ulf "Wolfy" Haag, Sweden
by Wesley Tucker
Well, things are picking up. The ISSA's new membership policy is bringing in LOTS of new people. Also, some current members have already stepped up and paid their dues for 2010. I haven't quite decided yet on a schedule but what I will do is post here the names of new members as they "accumulate."

First Last Country
Brian Parsons USA
Earl Cephas USA
Tim Chason USA
Gary Fluitt USA
Lynn Kramer USA
Pat Chewning USA
Julie Boulanger CAN
Richy Carrasco USA
Ulf Haag SWE
Keith Hollien USA
Glenn Chapman USA
Ricardo Damborenea ESP
Sam Gordon UK
Art Pryde USA
by Paul Price
Just paid my dues for 2010 but it took a lot of work to find out who to pay and how much.
Needs to be on the front page and as the top sticky in the forums
I paid issa@slalomskateboarder.com $25 via paypal.
cheers
see some of you in Texas
by Rick Floyd

Paul Price wrote:Just paid my dues for 2010 but it took a lot of work to find out who to pay and how much.
Needs to be on the front page and as the top sticky in the forums
I paid issa@slalomskateboarder.com $25 via paypal.
cheers
see some of you in Texas

...must be the language barrier!

Paul Price wrote:Just paid my dues for 2010 but it took a lot of work to find out who to pay and how much.
Needs to be on the front page and as the top sticky in the forums

Good point, Paul. We've discussed how to make it easier and are working on doing so as soon as we can.
by Ron Barbagallo
paid

where's my ISSA stickers? I need to repulse more women
by Pierre Gravel
Just paid too, i hope we all get a timing chip, gold start ramps and umbrella girls on the lineup like in F1.
by Rick Floyd
Umbrella girls! The ladies will probably want "Umbrella guys", but good luck finding such a beast.
by Wesley Tucker
A few more slalom skateboarders this week stepped up to support the cause:

Please make note that Neil "Dr. No" Orta went ahead and paid his dues . . . for the next TEN YEARS. (You can do the math.)

Thanks, Neil.
by Wesley Tucker
The paid membership is adding up. We've got 48 paid and that includes many new members who were not previously part of the ISSA.

Here who's jumped on board in the past two weeks:

Glenn
by Glenn Bukowsky
Am I a thread killer?! I hope not in this instance.
by Wesley Tucker
I don't know if the number is "magical" or not but the ISSA passed 50 paid members this week with a total of 51 on rolls:

See, Glenn? Everything is alive and well.

(I only do these updates once a week.)
by Wesley Tucker
Nine more:


I race for Holland not for Denmark.
Could you please change it?

Thank you.
by Wesley Tucker
The ISSA goes well over 70 paid members for 2010:

When the rolls come in from those who paid at the race in Texas we may be getting close if not over the 100 member mark.
by Wesley Tucker
Brazil Czechs in:

you keyboard is fast

You might want to double-check on Stryker. He attended the Sizzler and (presumably) is already an ISSA member as a result of entering that race.
by Petr Janousek

When the rolls come in from those who paid at the race in Texas we may be getting close if not over the 100 member mark.

Wesley, I (Petr Janousek) paid membership for Pavel Holec CZE. I´m twice in the list. Pavel Holec isn´t there. Wesley, please change it.
Thanks.
by Petr Janousek
Wesley, I found another mistakes:
1. Peter Novotny CZR is Petr Novotny CZE
2. Josef Stefka CZR is CZE too.
3. Peter Pletanek CZE is GER
Wesley, please change it.
Thanks
by Wesley Tucker
In anticipation of the 2010 ISSA World Championships in Hradec Kralove in the Czech Republic, several Czech slalom racers joined this week:

Christopher Dupont FRA
Michel Dupont FRA
David Baron CAN
Martin Reaves USA
Lisa Scott USA
Tomas Fiala CZE
by Wesley Tucker
Nathan Vestal over at Cosmic Skateboards signs up.
by Wesley Tucker
Because of no fault of his own, I failed to mention St. Louis's Marshall Presnell joined the ISSA in July.

He's been a member I just did not get an update posted until today.
All times are UTC+02:00
Page 1 of 1
Powered by phpBB® Forum Software © phpBB Limited
https://www.phpbb.com/