well i might be building a six-wheeler sometime in the near future (just for recreational use) and i have a few questions about building it. first off, how much distance should there be between the 2 rear trucks? from what i can tell, it's about an inch between the boltholes of the front and rear rear trucks. secondly, would it be okay to run two 139mm trucks in the rear, and an 85 in the front? or should i put two 85's in the back and a 139 up front? finally, for rear wheel choice, i don't have any square-lipped wheels, so could i put a set of blank noskool clones on?

alright, i've more or less been talked out of this, at least for the moment...sounds really complicated to get the rear trucks tuned properly and whatnot. but, if i do decide to do this in the future, could i run a LOT harder wheels in the rear? i mean, like orange zig rear/orange+ front?
I like my women like I like my trucks:
TALL, loose, and squeaky!
Top

Take a look at Chaputs setup to get an idea on how close together his trucks are, i think 1 inch is a bit too much.

I built a pretty nice six-wheeler about a year ago now, and if I can build one, anyone can.
"I like symmetry and geometric shapes"

"I wanted my head to appear small, and the easiest way to do that was to make my body bigger."
Top

yo, I am going to put on an Outlaw six Wheeler race , What was all the neg about those things anyways! Its all about going faster isnt it! SWEELER!
Top

Richy the big problem seemed to be running them in the same class as the 4 wheeler. They offer a definite advantage.

Keep in mind courses can be set to make them a disadvantaqge.

It would be great to see some races run with a 4 wheeled and 6 wheeled class just to prove the obvious improments.

Also in 06 there we less then a handfull of riders that actually raced a 6 wheeler. This seems to be why it was no longer an issue. I know I liked my set-up when I tested it. I think I raced it once but I am not sure. It may have just been a practice run.
Many Happy Pumps!
Top

I think the biggest prob was a few loud voices always oposing ,who are not around anymore to hang with the racers who are still having a blast racing. At my outlaw we will have a 6 wheeel race division ! Its all about having fun and going faster! We will run the same course and see if the times make a big difference.. Someone said - thats not a skateboard - Do you remember the Bigfoot in the 70s .
Top

I'm not for or against six-wheelers. But I have to say that in all my years helping to run races, it has seemed extremely rare that six-wheelers have a noticeable advantage. I've only seen them win once or twice, on courses that could be best described as Super-G. Much more often I've seen excited racers expect to kill it on their new six-wheel setups, only to be disappointed with their results. We'll see what the future brings!
Dan Gesmer
Head of Seismic Skate Systems
Email : dan@seismicskate.com
Tel : +1 720-937-8948
Top

Daniel Gesmer wrote:I'm not for or against six-wheelers. But I have to say that in all my years helping to run races, it has seemed extremely rare that six-wheelers have a noticeable advantage. I've only seen them win once or twice, on courses that could be best described as Super-G. Much more often I've seen excited racers expect to kill it on their new six-wheel setups, only to be disappointed with their results. We'll see what the future brings!

I have seen individual racers do better on 6 wheeled runs then they have on their standard 4 wheeled set-ups. Same day, same race.

If and when people start practicing for races you will start to see some dofference in times. Also, there was a lot of chatter from naysayers when someone pulled out a 6 wheeler to rave in an event. So some guys put them away. Chappy's answer were the Mongo's which again are faster in some instances.

When the discusion came about for it's use some of the board members refused to take a stand and allow sanctioned 6 wheeler races as a seperate event, even as a test project. so we just delayed things a little while. They ended up being banned on some events and allowed in others. That sucked as it caused some friction amongts the racers. Let's hope this board moves forward.

As if someone steps on a six-wheeler the storm troopers will burst in with stun guns and handcuffs to haul away the perpetrators.

Anyone at any time can ride whatever they damned well please. Always have, always will. The only thing the ISSA could and can do is decide someone who's riding a six wheeler is not eligible for World Ranking points. Promoters and organizers can do whatever they please on race day including inviting racers to ride six wheelers, razor scooters or powered electric wheelchairs. Who's to say they can't? The only issue is those people not riding boards with two trucks and four wheels will not have their runs counted towards the rankings. If five racers on six-wheelers come in the first five spots then the sixth racer gets the first place points. That's all it's ever been.

As soon as the rule was passed by a large majority of the members, however, the whole idea just vanished. Whoosh. But it's still the same today as it was in 2006: do whatever you want but remember some of the things you might want to do won't get points in a world ranking system so many skaters always like to yack about how they don't care about anyway.

I hope Richy has a great race. I hope I have the $1200 available to go out to Cali for it. I'd love to ride my Schweeler in a race. I paid Rick Ick a lot of money for it just in time for races to stop having them. 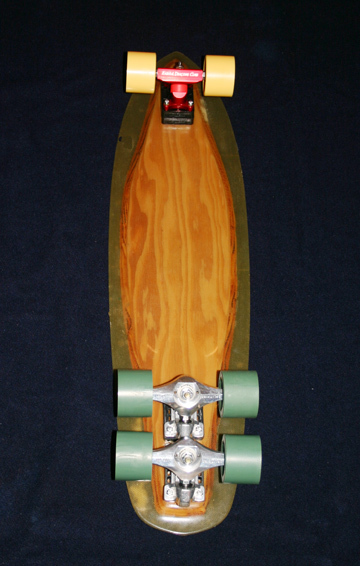 And one other thing. Since the Scwheeler issue of a few years ago, the ISSA adopted new By Laws in addition to new race rules. Under the new By Laws, guess what? It doesn't take a majority of the members to change race rules anymore. The Board of Directors can consider changing the rules to racing at any time if the rule change is considered in the best interest of the sport.

I think that they should have there own catagorie , but be part of racing ! Not Banned but promoted for the sake of going faster and safer if in fact that is the case . I was just saying that how much fun that would be for a bunch of 6wheelers to show up at my outlaw and shoot it out!
Top

As long as you don't start a 3 wheeled class now that Mitchell pulled off that amazing 3 wheel finish at Turi!!!!
Many Happy Pumps!
Top

I have heard the argument that six'ers are not skateboards, ridiculous in my mind. In street luge the progression went from two trucks to adding a second in the front and them some of us adding a second in the rear as well but never once did I hear it said that it was no longer a luge. As mentioned by Claude the course can be set so they are not an advantage and I saw this in streetluge as well....some courses were such that the third and fourth truck either showed no advantages or caused them to actually be a hinderance to speed.

Great idea Richy! Add a class into a race for sixes and let's see if they are faster, by the numbers.
Top

Richy Carrasco wrote:I think that they should have there own category, but be part of racing! Not banned, but promoted for the sake of going faster and safer, if in fact that is the case. I was just saying how much fun it would be for a bunch of 6-wheelers to show up at my outlaw and shoot it out!

Bring on the Schwheeler Races! I dunno if I'll actually be able to make it to a race, but it's nice to hear some buzz aboot schwheelers again....
Top

Keen on a fiddle in the shed so wondering what you guys would recommend if ya had an Airflow and a pair of Tracker RTX,s.

Recently took the missus on holidays and took advantage of the trip and bought a board home, never would have got it sittin on the couch and asking, anyway its a Loaded pintail with a pair of Gullwing sidewinders, reason for purchase was to mess with bushins to see what could get out of it, it grooves and turns 180 degrees in a 4 foot area, back feels like a snowboard sliding round (it was slalom that got me bushing fiddling).

Any how i am figuring I will have to put the Airflow and rear Tracker on the rear to even pretend this is going to work, would that be right ? or do you guys know something I have not thought of yet ?
Top
Post Reply
16 posts • Page 1 of 1