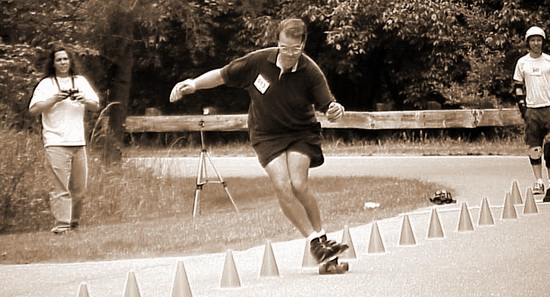 Our friend and fellow skater Wes Tucker has passed away

Many, if not all of you knew him and I'm sure you all have a story about him. We should share them here.

Wes was sometimes a kook and a pain, but we all know he was a good guy and did a tremendous amount for slalom skateboarding.

I will miss him very much
Evil Potentate
Team Fatboy - all hopped up on goofballs!

Damn, I just now heard the news. I only met WT twice in person, at races in Charleston and Athens. But I stayed in touch with Wes on and off since then, and especially lately in facebook (when I could stomach the place). I suspect he would be pleased that many of you would think of him as a kook and a pain LOL...he had the personality of a true Southerner and all the eccentricities that come with that...you really were nobody unless WT found something or another rib you about mercilessly. Much more than this, though, he was a good man. One less parallel-stance racer in the world, and we are poorer for it. Godspeed!
Top

Have just met him one time during the folly beach race in south carolina in 2002. Remember he borrowed me one of his boards because coming from France with one unic longboard I wasn't able to finish the tight slalom. Since that I never seen him again but speak with him sometimes on facebook. Remember him as somebody passioned by skate history and old board, remember of a nice summerski and santacruz in brought to the race. Rip Wesley : A part of the skate memory go on with you.
Top

Saddened to see this.

I first met WT at a race I held in Boston. As the course setter I watched him and Terence Kirby battle it out- WY had excellent starts. Both of us had strong feelings for Turner Summer Ski and discussed the brand at length whenever we met.

I remember coming down to compete at Folly Beach and being introduced to the idea of shrimp for every meal (works for me!).

Also his tenacity to debate pre-published courses , and being the first to actually introduce it to racing and not just talk about it.... to stick to a pre-published course ideal- which I completely endorsed because it allows racers to come better prepared. He also tried to form a language to describe the courses....IMHO a great contribution.

Even when the 2002 Folly Beach race venue (his first pre-pblished course) was rained out for over 12 hours- Wesley and Tasos still held the race in a Bus terminal- fun was had by all, I won my first and only World Championship- and ...most incredibly, not only did Wesley stick to the pre-published race course- when the previous venue was rained out- he found a venue where the course would still work.... pretty remarkable.

Many people would argue over limited push, ramps, etc.... and Wesley had to learn to use ramps riding parallel (not easy), and for all the debate that occurs (thankfully) on the slalom forums I hope this Pre-published course concept eventually becomes part of his legacy.

Wesley did the stuff, necessary in Slalom communication... maintaining this forum as a needed alternative for in depth thread discussion that Adam Trahan and I had envisioned, (I met Adam through swallowtail snowboards a decade earlier). Wesley was tireless at this, and had the time between printing jobs to fend off the bots. I could never do what he did.

Whenever I was online through AIM his name would always be online, illuminated.

I was always comforted that Wesley was up overseeing and available. It is odd to see it greyed out forever.
One good turn deserves another
john gilmour
Top

Sad to hear the news of Wes' passing

I remember meeting him for the first time at a Farm Race during the Vintage event, inquiring about his Turner and hearing first hand the story of how he acquired it - a great skate story.

Also, I always followed his posts on multiple sites - my favorite (and I can't rember on which site) was his photo thread chroniciling the creation of his "kite" shaped Ick Sticks and getting to see the board in person.
Top

Wow, I just found out about WT's passing away while stumbling on a random login to www.ncdsa.com. Dang, Double Dang. I'll miss that guy even though he lives almost as diagonally across the lower 48 as I can from him, and it's good too, since really, I can't stand that guy. OK, "that" was for Wesleyschmesley's benefit since that was his sorta humor.

Yes, the previous posts are spot-on and they capture Wes well.

Tomorrow is South Carolina vs. Georgia in Athens. Wesley most likely would have been in Sanford Stadium. When the "slalom revival" first took off a little more than 10 years ago, some guy named Tasos decided to throw the World Championships of Longboard Slalom in Folly Beach, South Carolina. No doubt this event wouldn't have happened without Wesley being involved. When I arrived in Folly Beach he was the first person I met. He talked about slalom skateboarding as if it had been going on regularly since the early 1970's. That's because for Wesley, slalom was skateboarding. I don't think he ever owned a skateboard with a kicktail. Outside of Gilmour, he probably had more Turner Summer Ski's than anyone east of Colorado. After arriving back home in Athens, the Folly Beach experience provided me with the inspiration to hold the Georgia State Slalom Skateboarding Championships, which eventually became the Red Clay Cup. Neither of which would have ever occurred without Wesley Tucker, both for his involvement in the Folly Beach race, and his unselfish volunteer efforts during the races here in Georgia. I remember watching him struggle with start ramps, fearlessly face the steep incline of Trade Street, and pulling up in his Camaro at races from Jackson, Mississippi to St. Louis, Missouri. Tom Thompson and I had lunch at Cracker Barrel with him on our way back from Jackson one year. Sure, his politics were diametrically opposed to mine, but we shared a love of skateboarding that precious few people in this world will ever understand. It brought us together in spite of our differences.

So tomorrow, in honor of his passing, I'm going to cheer for the "old ball coach" and root for the Gamecocks. Then I'm going to see if I can find my cones and plow them down parallel stance while echoes of "66, you bastard!" ring through my ears.

I hope there are coneheads in heaven.
Top
Post Reply
7 posts • Page 1 of 1