Over the last 6 months I have been asked repeatedly for drawings of ramps and information on what constitutes a good start ramp for slalom.

As there isn't such a thing as the official ramp. I'm now starting a series of posts presenting ramps that are currently used or have been used in slalom racing all over the world.

I'll sometimes add my own subjective comments to the posts for educational purposes. Feel free to add your own as a reply to this and other posts.

The first ramps described will be the ramps used in the US during 2002 for the FCR races. Most likely you'll see these ramps used again in 2003. 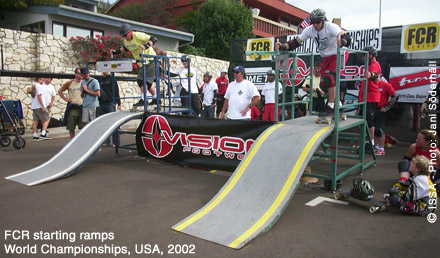 These ramps are very low, but seemed to generate enough speed for slopes where most of the FCR races were held.

As they are of metal constuction they are quite heavy and as such withstand fairly well the power and weight of the skater pulling off. However they still moved slightly and needed to be put back in position during the races.

Most people seemed to have been pleased with these ramps. The only complaints heard were about the gates (see another topic "Gates, gates..." to discuss whether to use gates or not).

FCR, if you have drawing/plans for these ramps would you mind publishing them one day?

Especially useful would be the dimensions and diameter of slopes. Width and length of platform etc.
Last edited by Jani Soderhall on Mon Oct 13, 2003 8:53 pm, edited 2 times in total.
Top

If FCR could at least just provide the height and length of the ramp and platform.
Top
Post Reply
2 posts • Page 1 of 1