JUST WANT TO TELL ALL EUROS TO VOTE, AND TO VOTE EUROPEAN. WE ARE ONLY THREE EUROS UP AGAINST A LOT OF CANS

Where can I vote?

you have to be an ISSA member to vote!

It's probably not too late to become a member?? You can for example buy the website costs for a months or just pay to subscribe...


And Peter there are THREE euro candidates? Don't you notice ?


Jean-Sebastien Dennebouy, he is the full-time worker of the French Downhill National Comitee, he was involved in the PSWC organization last two years, as well as Grenoble and all french races but including also DH like Izoard , Hautacam. He is also one of the Core Pirate members and one of the first Riderz slalomskateboarder.

His work is to develop skateboard in Paris and downhill (and gravity) sports in France. THis include to organize (or at least help organizer) the French championships, to administrate results and rules, to be press attaché sometimes, to search for sponsors, he is also a website specialists now...

As he is working full time for skateboard and downhill development, he could be great to have him wworkin with ISSA too...

You probably met him in Germany, Paris or Antibes: 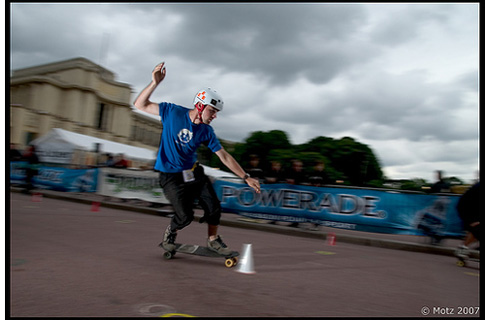 [ www.pavel-skates.com ] [ www.riderz.net ]
"Dont care what the World say - I and I could a never go astray -Well wee gona have Things our Way" - Robert Nesta Marley
Top

I am so sorry you are absolutly right. see, vote for those two i am stupid.
Top

Do you give students discount?

Individual memberships are $25 (US)

It's a deal no one should pass up!

Come on Brothers and Sisters, vote for me and I´ll set you free
Top

- Peter I'm buying you a vote.
- Ramón its an honor to pay your entry fee to the ISSA.
- Jani I'm sending you 20€ for Ramón to get a membership.

Yeaaaah boy, you are the real McCoy.
Top

Ramon didn't carry away any prize money from the Worlds, and he really deserved it. He was on fire and was posting the fastest qualifying times, but then lost out unexpectedly. It's kind of you Marcus to help out a poor Pro rider.

i already gave you a vote, even if i don't know if this is a good idea.

How it looks like the witghted voting will be over after this voting. 77% against it.

The question now is, should i buy 4 more votes or fly you in for the next competition in Switzerland Peter ?

Jani, is it possible to pay by bank ? No paypal as always. I will pay all komissions for the transfer!

You will get the 100 Euro next week. 4 more votes for me and 1 for Stephan Bölsterli.

It's an political decision, just because of the discussion what happens with them who payed more after we decide one vote for one member. And a bit of love with Petar Klangvic.

It will be nice to know what Donald did with his votes ? Is this a secret Don ?

Jadranko Radovanovic wrote:Jani, is it possible to pay by bank ? No paypal as always. I will pay all commissions for the transfer!

Of course we can solve that! I sent you an email.

I have voted EUROPEAN !
Top

I think it worked!

Two European nominees, Peter Klang and Paul Price, are new members of the ISSA Board Of Directors.

Along with Vinzzzzz and Corky, this makes the Board now with four European members and three from North America.

You got what you asked for. Now it's up to the you!

Marcus Seyffarth wrote:
- Peter I'm buying you a vote.
- Ramón its an honor to pay your entry fee to the ISSA.
- Jani I'm sending you 20€ for Ramón to get a membership.

Hey Marcus, thanks a lot for paying my entry fee! I'll come back to this generous act of yours next season.

I already got called in the name of ISSA

No worries Ramon, as I said its an honor! Its also good to have someone who can put the 'T' in the 'TS' on the list.

speaking of that - I haven't skated since august, that sucks
Top
Post Reply
18 posts • Page 1 of 1