i am making carbon fibre boards from prepreg carbon fibre and foam and would be interested in your feedback,Let me know what you think.send me your email and ill send you some pictures
Many thanks Geoff. 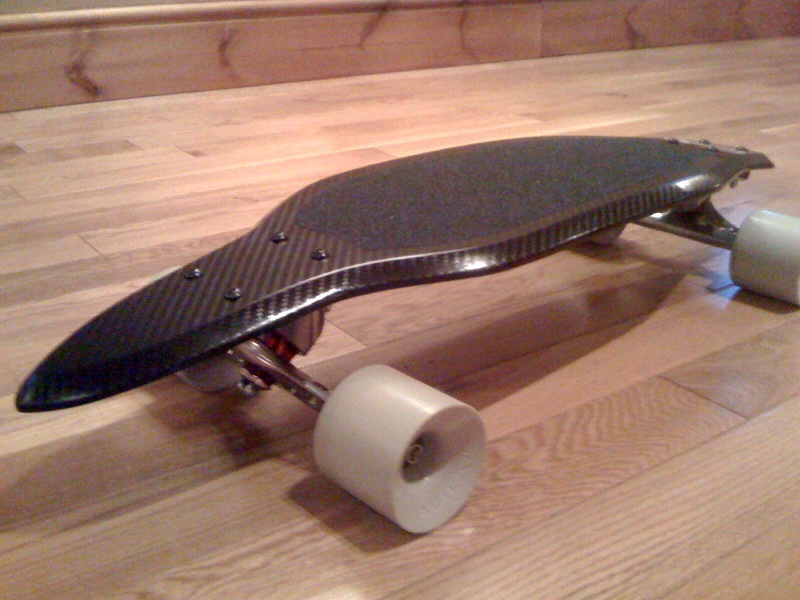 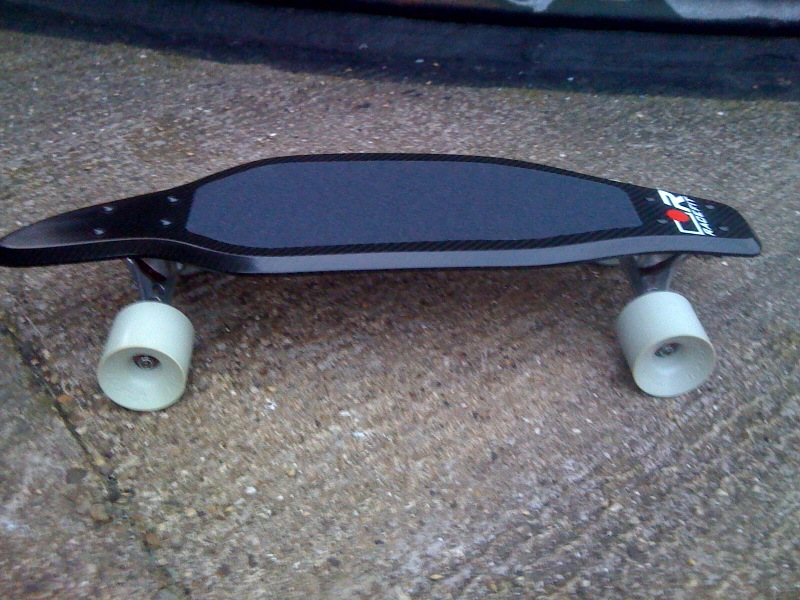 Send a few to me and I'll upload them here!

very nice job geoff!
what about the bottom,can we see a bit more maybe?
thanks in advance and keep up the good work
Top 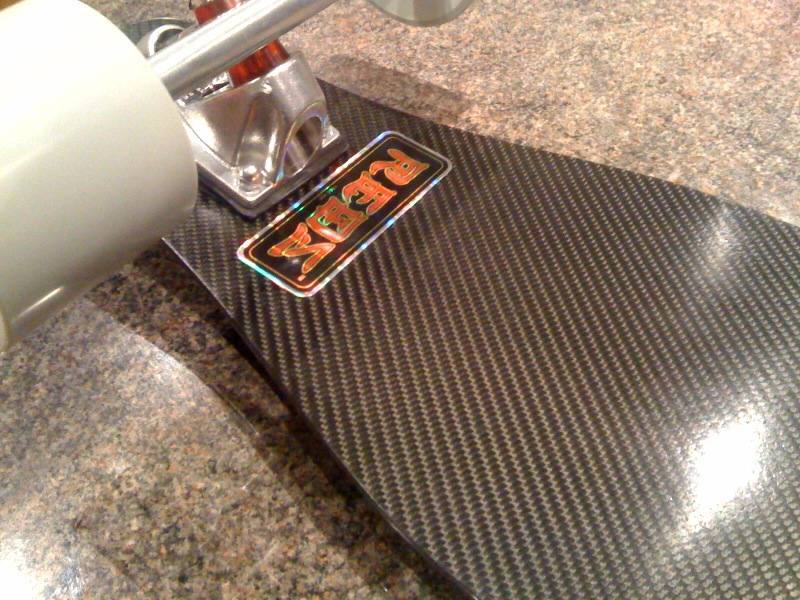 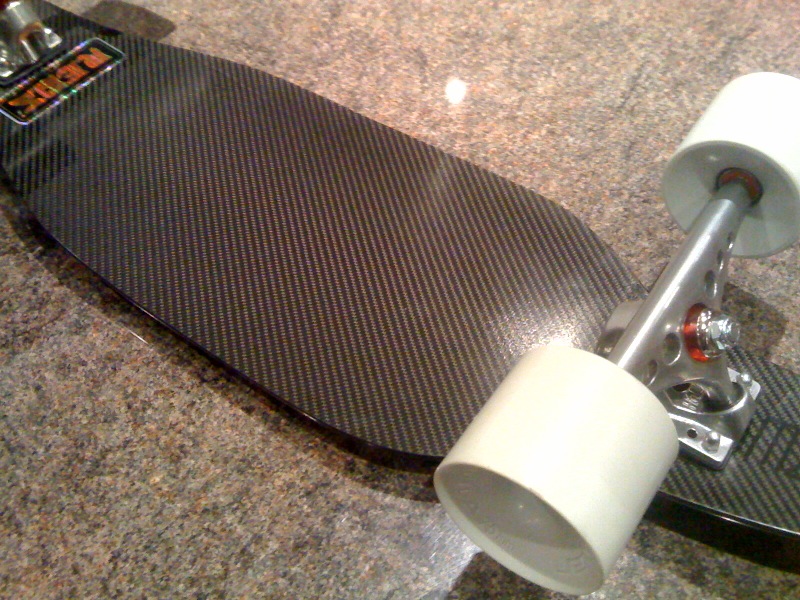 I like it alot too really nice!
But why those beefy Holey trucks... they look good but they don't turn?
www.slalomskaters.com
Top

Hi thanks for your comment, as i am new to this i dont know good trucks or bad trucks this is the first board i have ever made and im sure with a bit more research and helpfull advice i will manage to make a truly great board.
thanks Geoff
Top

As a huge Turner fan I have to say this makes me very happy! The board looks super!
Good Job Geoff!
http://www.ettsexett.com/team/img/antonio/antonio5.jpg
Top

geoff hitchcock wrote:this is the first board i have ever made

If this is your first I can only wish all the rest of the worlds boardbuilders good luck in the future. Great stuff, man!
Now go build an up to date slalomboard with concave and kick, please!

Hi and thanks for your comment,im going to get working on that board straight away.
Any tips or suggestions would be greatly appreciated.
Top

That Board looks sexy! Perfect craftmanship......and it's your first board! Wow! I have seen a lot of "first boards"

Now you need to match your boardbuilding skills with the todays requirements for a "modern" race board and I think you will sell more than one board!

Great looking board! Bobby would be proud!! You have done a great job in replicating a classic, while employing modern materials. It may just be the pic, but that wheelbase looks extra short, the components are not the best choices but amazing craftsmanship..
What price range do you foresee? I have several Turners (From all generations) And would like to get a 2009 version! (although not a true Turner)
ENJOY!! (while you can)
Top

As for the trucks I don't think that you need to go for G.O.G's or Radikals on your first board, you will do fine with Tracker RTX/RTS 106mm to start with just as most of the old Turners had.
www.slalomskaters.com
Top

wow!!!!!!
The waves of life makes us stronger!
Top

Amazing finish quality. What made the original turners work was the monocoque construction.. ie what we call "cap" construction. Cap Skis- don't do it as well as Bob Turner did because they have to have flat tops for mounting bindings... and lose rigidity and snap as a result.

It is the curve that gives the material it's rigidity and flex characteristics.. and as the height of the cap approaches the width of the material the torsional rigidity goes up... not down.. so an extra wrap of material around the skinny nose can yield the same longitudinal flex by way more nose rigidity..and the higher the arc of the nose... well. you get the same result.. (too high is unstable though- just a little is needed) .

For instance... take a sheet of fiberglass- and let it cure flat in the same plys - and glue ti to make it a bi layer of multiple plys..

.. now take a duplicate sheet and amount of material and let it cure in a cereal bowl and then glue the flat sheet to the bottom... it will resist twisting intensely..

So that 3d curve gave the Old Turners the needed wheel clearance without sacrificing much torsional rigidity in the nose an tail sections...

It was also the reason why the Turner Hybrids (A crappy construction made the same way as the lowest cost snowboards by Taylor Dykema
http://www.tauberaronsinc.com/taylor/taylor1.html cut by water jets to be cheap.. ) which had no top curve across the deck or down the rails were a not as successful in flex patterns in the same shapes as the original Turners (the nose and tail would "bog"). The shape of the Turner Hybrids no longer could be optimized because the construction was changed to one that did not benefit from the shape (in fact that construction just wasn't suited to racing) . heck...no one ever listened to me

.. and Bob never liked those decks either....he wasn't exactly sure how the shapes translated into performance.. but he was hell of a shaper and a perfectionist, and very very into improving his designs, the racers just knew which ones worked, and he listened to what we wanted... and if the communication between the racers was really good- he made world beaters.

Carbon fiber is torsionally more rigid- so in theory.. the boards if made of the same shape as the original fiberglass Turners...they would need/take advantage of smoother pavement.. they would be less road surface compliant- but more responsive and super super snappy for high CPS.
One good turn deserves another
john gilmour
Top

In a different vein here are a few Turner inspired trophies shaped by Gabe for this years NASS Festival - along with the special award board "Smoke'n White Ninja".
This photo doesn't really do them justice as you can't see the shaped and sculpted lines too well.